Get latest articles and stories on Entertainment at LatestLY. American singer and songwriter Marc Anthony and his 23-year-old model girlfriend, Nadia Ferreira, have gotten engaged. 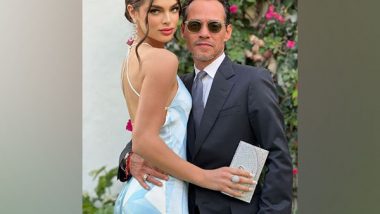 Washington [US], May 14 (ANI): American singer and songwriter Marc Anthony and his 23-year-old model girlfriend, Nadia Ferreira, have gotten engaged.

According to Fox News, the couple announced their engagement at a party in Miami. Ferreira posted a picture of her diamond ring on her Instagram story and along with it wrote "Engagement party." In it, her hand was on top of Anthony's.

The couple continues to have a strong friendship and share custody of their children.

Also Read | Kareena Kapoor Khan Gets Ready for Shooting of Devotion of Suspect X in Presence of Her 'Best Man' Jeh! (View Pic).

As per Fox News, Anthony's latest engagement is his fourth. In addition to Lopez, the singer-songwriter married Miss Universe Dayana Torres in 2000 and Shannon De Lima in 2014. (ANI)