As per E! News, on Sunday, Lopez and Affleck were photographed at a private residence in the Florida city. 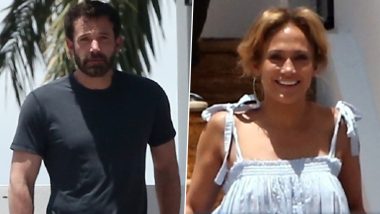 It's another Bennifer 2.0 sighting! Actors Jennifer Lopez and Ben Affleck were recently captured in Miami, where she maintains a home, as their rekindled romance continues. As per E! News, on Sunday, Lopez and Affleck were photographed at a private residence in the Florida city, where she owns a different home, weeks after they rekindled their romance. JLo was all smiles as she walked down a flight of stairs outside with the Oscar winner following close behind. Jennifer Lopez Still Has Ben Affleck’s Engagement Ring Worth $ 1.2 Million: Reports.

A source who witnessed their reunion told E! News, "Ben took a red eye to Miami and went straight to J.Lo's new house in the early morning hours. She looked very happy to see him and they walked around the property together so she could show him around." The insider added, "She had a big smile on her face and was twirling in a loose summer dress. They spent the day inside together but came out a few times for fresh air and to admire the water view." Alex Rodriguez’s Dinner Outing With Daughters Shows Empty Seats After Jennifer Lopez Split.

Last week, the two were previously spotted together in Los Angeles, where they both have homes, a source close to Jennifer told E! News on May 20. The insider said, "They were excited to reunite after being apart for a few days. She had a break in her work schedule and wanted to see him again." The source continued, "It's all very new and exciting even though they have known each other forever. It's been fun to get to know each other all over again. They are both very happy with where things are and where they are going. She had to leave to go back to Miami for work, but they plan to see each other again soon."

In mid-April, Lopez and Alex Rodriguez confirmed they had ended their engagement after a four-year relationship. Later that month, Affleck was spotted at Lopez's mansion in Los Angeles. In early May, the two further sparked romance speculation when they vacationed for about a week together in Montana, where the 'Argo' actor has a residence. It marked the first time the two were photographed together since they ended their own engagement in January 2004 after an almost two-year relationship.

Rodriguez, a former New York Yankees star, seemed to throw some subtle shade at Bennifer's reunion earlier this month when asked about them. When asked about it, he said, "Go Yankees!" After Lopez and Affleck were photographed in Montana, a separate source told E! News that Rodriguez was "shocked that J.Lo has moved on." Lopez and Affleck were engaged in 2002 and co-starred in the films 'Jersey Girl' and 'Gigli'. They postponed their 2003 wedding days before they were set to walk down the aisle, then officially split by January 2004.