Madonna to Direct Her Own Biopic, Co-Written by Oscar-Winning Writer Diablo Cody 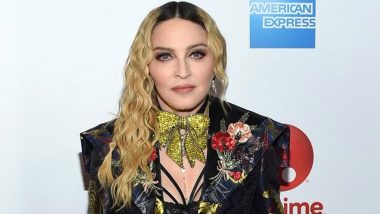 Pop-icon Madonna is all set to helm her own biopic for which she has been working with Oscar-winning co-writer Diablo Cody. The singing sensation will be directing her own journey from the New York City slums to heights of global stardom over the five-decades long career. According to Variety, the untitled film has landed at the Universal Pictures under the wing of filmed entertainment group chair Donna Langley and producer Amy Pascal, whose eponymous company is set up on the Universal lot. The production dates and the cast of the film are yet to be announced. Elvis: Tom Hanks to Resume Shoot for Legendary Singer’s Biopic in Australia from September 23

"I want to convey the incredible journey that life has taken me on as an artist, a musician, a dancer -- a human being, trying to make her way in this world," Variety quoted Madonna as saying. "The focus of this film will always be music. Music has kept me going and art has kept me alive. There are so many untold and inspiring stories and who better to tell it than me. It's essential to share the roller coaster ride of my life with my voice and vision," added Madonna. Sam Rockwell in Talks to Play Merle Haggard in Country Music Legend’s Biopic For Amazon Studios

Praising the musician for her hard work over the years, Langley termed her as "the ultimate icon, humanitarian, artist and rebel." "With her singular gift of creating art that is as accessible as it is boundary-pushing, she has shaped our culture in a way very few others have," Langley said. The biopic can be seen as a reunion of Madonna and Pascal who worked together in 1992 to make the sentimental favourite, 'A League of Their Own.'

"This movie is an absolute labour of love for me. I have known Madonna since we made 'A League of Their Own' together, and I can't imagine anything more thrilling than collaborating with her and Diablo on bringing her true-life story to the big screen with Donna and our partners at Universal," Variety quoted Pascal as saying. Madonna has earlier helmed two feature films - 'Filth and Wisdom' and the Golden-Globe winning 'W.E.' Besides that she has also acted in several films like 'Desperately Seeking Susan,' 'Evita,' and 'Dick Tracy.'