Former Miss World Manushi Chhillar is all set to make her Bollywood debut alongside Akshay Kumar in the much-awaited period drama Samrat Prithviraj. 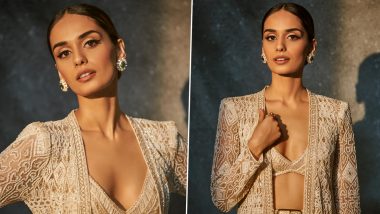 Former Miss World Manushi Chhillar is all set to make her Bollywood debut alongside Akshay Kumar in the much-awaited period drama Samrat Prithviraj. During the promotions of the film, the actor shared a gorgeous look on her social media account. On Saturday, Manushi took to her Instagram handle and shared a string of pictures and a video clip showcasing her look.She exuded sheer elegance and grace in ivory sharara. Samrat Prithviraj: YRF Changes Akshay Kumar, Manushi Chhillar’s Prithviraj Title Ahead of Its Release.

She simply captioned the post and wrote, "Where there's light." For the promotion, Manushi opted for Ritika Mirchandani's ivory sharara. She added a sensual touch to the traditional sharara ensemble with her bralette style blouse and fit-and-flared pants. The floor-length embroidered shrug is embellished with mirrors and beads, which added glam to the look. She paired her outfit with a matching belt donned over her waist. Prithviraj Is Now Samrat Prithviraj: Akshay Kumar, Manushi Chhillar’s Period Drama Gets a New Title.

Flower-shaped diamond studs complemented the actor's appearance. Her look was finished off with a bun, glittering eyeshadow, mascara-laden eyes, well-defined eyebrows, highlighted cheeks, and glossy lips. Meanwhile, Chandraprakash Dwivedi's film 'Samrat Prithviraj' is based on Prithviraj Raso, a Braj Bhasha epic poem on the 12th-century ruler Prithviraj Chauhan, and is produced by Yash Raj Films and will be out in theatres on June 3. Along with Akshay and Manushi, it also stars Sanjay Dutt and Sonu Sood.