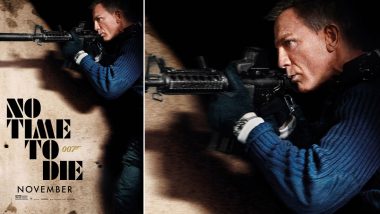 The makers of the much-anticipated 25th James Bond film 'No Time to Die', starring Daniel Craig dropped intriguing action poster of the film on Wednesday that featured the Hollywood star marching into his final mission with a gun aimed at his enemies. The poster of the latest James Bond franchise showcases the 'Man on the mission' Craig aiming his rifle. The new poster that featured Craig aiming for his shot was dropped on the Instagram account of James Bond. The exciting poster is a signal to fans that Bond is not messing around when it comes to hunting down his enemies. No Time To Die New Trailer: Netizens Are Hyped Up About Daniel Craig’s Spy Thriller (Read Tweets)

"The mission that changes everything. The new poster for #NoTimeToDie is here. In cinemas this November," the caption of the post read. The action flick is all set to drop in the United Kingdom on November 12 and in America on November 20. The worldwide release dates will follow after UK and USA releases. Though a new release date has been announced for the UK and USA, there has been no word on the Indian release date of the film. No Time to Die New Trailer: Daniel Craig Jumps off a Bridge, Dodges Bullets While Drowning, and What Not in This Wild New Footage (Watch Video)

Take a Look at No Time To Die New Poster Below:

The mission that changes everything. The new poster for #NoTimeToDie is here. In cinemas this November. pic.twitter.com/r5SpKm4ONd

'No Time To Die' which is a spy-thriller was originally slated to release in April 2020 but was postponed to November owing to the coronavirus crisis. The story revolves around Bond enjoying retirement in Jamaica. However, his peaceful days are short-lived, as his old friend from the CIA, Felix Leiter, (Jeffrey Wright) arrives asking for help.