Get latest articles and stories on Entertainment at LatestLY. Rajkummar Rao and Janhvi Kapoor have started shooting for their film 'Mr and Mrs Mahi'. 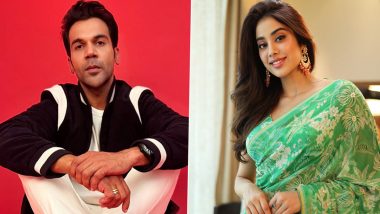 "Best of luck to the entire team of Mr and Mrs Mahi for starting the first innings! Knock it out of the park," he wrote, adding a picture of the film's clapperboard. Being helmed by Sharan Sharma of 'Gunjan Saxena: The Kargil Girl', ''Mr and Mrs Mahi' is a cricket drama. Rambo: Tiger Shroff To Give Four to Five Months for Prepping Action Sequences; Shooting of the Film To Start From the End of 2022.

Rajkummar and Janhvi will play characters named Mahendra and Mahima, respectively, in the film, which is marking their second collaboration after 'Roohi'. (ANI)