Get latest articles and stories on Entertainment at LatestLY. Ahead of the release of 'Runway 34', actor Rakul Preet Singh opened up about the training she underwent for the role of a pilot in the film. 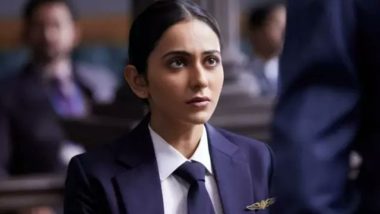 Ahead of the release of Runway 34, actor Rakul Preet Singh opened up about the training she underwent for the role of a pilot in the film. "It is one of the best scripts I heard in a long time and I jumped to bag this role. My experience playing a pilot was amazing because I love my job for the reason that you get to play different roles and learn so many different things," she shared. Bechari: Karan Kundrra and Divya Agarwal to Feature in Afsana Khan’s New Song.

"How else would I have known how a cockpit looks? We had cockpit training for about 2 - 3 days, where there was a captain on the set who told us how the entire panel works because we shot in a real simulator, also during the entire shoot, the captain was there just to make sure that we use the right button, and use right terminology while flying a plane so it looks authentic," she added.

Rakul further said, "And when you step into a uniform there is a certain sense of dignity that automatically steps in - the way you walk, the way you talk, the way your language is, the way you react is very different from what a girl next door would. Runway 34: Second Trailer Of Ajay Devgn, Amitabh Bachchan’s Film To Be Released On April 11 (View Poster).

This is all that went into preparing for this role." Runway 34 also stars Amitabh Bachchan, Ajay Devgn and Boman Irani. Ajay has produced and directed the film, which will hit the theatres on April 29.