Bollywood actor Yami Gautam, on Friday, has headed to Kolkata to start shooting for her next, project, titled 'Lost'. 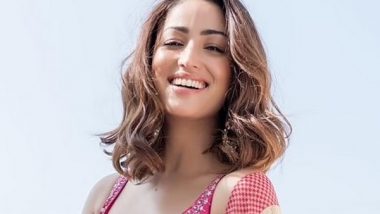 Taking to her Instagram handle, the actor shared a glimpse of herself from her hotel room at the West Bengal's capital.

The newly married actor looked exquisite in a maroon suit. To complement her look, she opted for light makeup with bold red lipstick and a sleek ponytail. To accessorize the attire, she wore a matching bindi with a pair of gold colour hoop earrings.

For the unversed, the 'Sanam Re' actor is all set to share screen space with veteran star Pankaj Kapur in 'Lost'.

Directed by Aniruddha Roy Chowdhury, 'Lost' is being touted as "a hard-hitting investigative drama centered around media integrity".

Yami will essay the role of a crime reporter in the upcoming project. 'Lost' will also feature Rahul Khanna, Neil Bhoopalam, Pia Bajpiee, and Tushar Pandey.

The film will be largely shot at real locations across the city of Kolkata and Purulia and will highlight the underbelly of an urban city that often goes unnoticed.

Ace composer Shantanu Moitra along with renowned lyricist Swanand Kirkire will capture the essence of the city and emotions of the narrative.

Produced by Zee Studios, Shareen Mantri Kedia, Kishor Arora, Sam Fernandes, and Indrani Mukherjee, the film is expected to go on the floors in July 2021. (ANI)