The Game of Thrones alumni will play a lead on the new show that is currently being developed with Ewan McGregor. 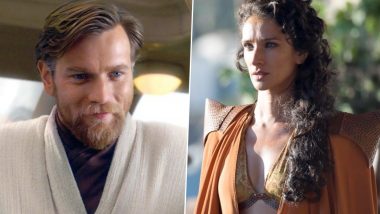 British actor Indira Varma has now become the newest entrant to join the cast of the Disney Plus series named Obi-Wan Kenobi. The Game of Thrones alumni will play a lead on the new show that is currently being developed with Ewan McGregor. According to The Hollywood Reporter, Indira will star in the series opposite Ewan McGregor and Hayden Christiansen, who will reprise their roles as, respectively, Jedi master Obi-Wan Kenobi and his former pupil, now the Sith Lord Darth Vader. Hayden Christensen to Return As Darth Vader in Ewan McGregor’s Obi-Wan Kenobi Series on Disney+.

In keeping with the cone of silence surrounding the show, details about Varma's character have not been released at the moment. The series is expected to fall in between 'Revenge of the Sith' and 'A New Hope' in the 'Star Wars' timeline. Producer Joby Harold, whose credits include, 'John Wick: Chapter 3' and 'Underground', will be writing the show. He came aboard in April 2020 following a creative reset. 'The Mandalorian' veteran Deborah Chow is set to direct. Disney Plus’ Obi-Wan Kenobi Series Ropes In John Wick 3’s Executive Producer As Writer.

As per The Hollywood Reporter, Varma is currently a series regular on ABC's legal drama 'For Life', which wrapped its second season last week. She played Ellaria Sand on 'Game of Thrones' and her other credits include Amazon's 'Carnival Row' and HBO's 'Rome'.