He has ordered a probe and sought a detailed report from concerned officials. 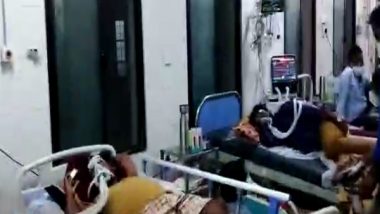 Tirupati, May 11: As many as 11 patients, who were on ventilator support, died due to low pressure in medical oxygen supply at Ruia Government Hospital in Tirupati on Monday, Chittoor District Collector M Harinarayan. Andhra Pradesh Chief Minister YS Jagan Mohan Reddy has ordered an inquiry into the matter.

"This mishap took place due to the reduction of pressure in the oxygen supply. 11 patients who were on ventilators lost their lives," Hospital Superintendent Dr Bharati said. Soon after getting information about the incident, the district collector and Superintendent of Police rushed to the spot.

Speaking to media persons, the Chittoor District Collector said, "As of now, death of 11 patients has been confirmed. Treatment is going on for the remaining patients at the hospital. The incident took place at around 8.30 pm due to low pressure in medical oxygen supply. Several COVID patients are on ventilators there. Pressure was reduced for hardly five minutes. Meanwhile, an oxygen tanker came but before the hospital authorities could set it up, we lost 11 patients." Andhra Pradesh: 11 Patients Die in Ruia Govt Hospital in Tirupati Due to Reduction in Pressure of Oxygen Supply; CM YS Jagan Mohan Reddy Orders Probe.

"There is adequate oxygen in the hospital. Almost 1,000 patients are getting treatment here. The hospital has 700 oxygen beds and the remaining 300 are regular beds. Around 30 doctors are working on a war footing. Tomorrow more oxygen will come. The oxygen tanker has to come from Chennai. It got delayed by some time. An investigation, including police inquiry will be taken up," Harinarayan added.

Meanwhile, the Andhra Pradesh Chief Minister has expressed grief over the incident at the hospital. He has ordered a probe and sought a detailed report from concerned officials. "Reasons for the incident must be identified and steps should be taken to ensure that no such incidents occur again," Reddy said.

He has further ordered to monitor the situation at every hospital in the state round the clock. He directed officials to give special focus on the management of oxygen systems in hospitals besides oxygen collection and supply.