When they gathered at the Jantar Mantar for the protest, they were warned and it was conveyed to them that they did not have the permission to organise the protest, the officer said. 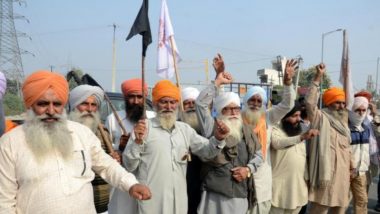 New Delhi, November 27: Over 70 people were detained on Thursday when they were staging a protest at the Jantar Mantar here in support of Punjab farmers, who are agitating against the Centre's farm laws.

But when they refused to abide, they were detained and taken to a nearby police station from where they were released later, the officer said. Delhi Police personnel have been deployed in large numbers in border areas of the national capital and all incoming vehicles are being checked in view of the 'Delhi Chalo' march by Punjab farmers against the Centre's farm laws. Also Read | Navjot Singh Sidhu Had Boiled Veggies, I Had Missi Roti with Dahi, Says Punjab CM Amarinder Singh.

Five sand-laden trucks have been stationed at the Singhu border to stop tractors being driven by the protesters, police said.