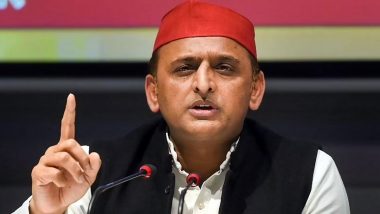 Lucknow, July 3: Samajwadi Party (SP) chief Akhilesh Yadav on Sunday dissolved all the party posts with immediate effect, but retained the post of Uttar Pradesh unit chief. The move came days after party's debacle in Rampur and Azamgarh Lok Sabha bypoll. Though the party has not given any reason for the move.

"The national president of Samajwadi Party (SP) Akhilesh Yadav, dissolves all party posts with immediate effect, except the party's Uttar Pradesh State president. National presidents, state presidents, district executive bodies of the party's organisations, including youth and women's wings, and all other cells have been dissolved," the party said on its Twitter handle in Hindi. Samajwadi Party Chief Akhilesh Yadav to Resign from Lok Sabha Membership Today, Say Sources.

Both seats were considered Samajwadi Party bastions. The bypolls were necessitated by the resignations of Akhilesh Yadav and Azam Khan from Azamgarh and Rampur seats, respectively. Both leaders quit as Lok Sabha MPs following their election to the Uttar Pradesh Legislative Assembly in the elections held earlier this year.