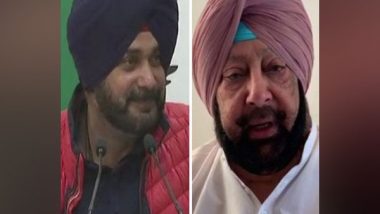 Raveen Thukral, Media Advisor to the Chief Minister, said Capt Amarinder Singh has invited all Congress functionaries at Punjab Bhawan on Friday for tea and they will later go to or installation of the new Punjab Pradesh Congress Committee (PPCC) team.

"Punjab CM Captain Amarinder Singh has invited all Congress MLAs, MPs and senior party functionaries at Punjab Bhawan for tea at 10 am on Friday. They will all then go to Punjab Congress Bhawan together from there for the installation of the new PPCC team," he said in a tweet.

Earlier, AICC-in-charge of Punjab Harish Rawat also said the Chief Minister will be present during the team installation ceremony.

"Under the leadership of Captain Amarinder Singh, Congress will unitedly welcome the new president tomorrow. Congress MPs will be present," Rawat said.

The Congress had appointed Sidhu as Punjab Congress chief on Sunday ahead of the assembly polls early next year.

Sidhu wrote a second letter to Chief Minister Amarinder Singh on Thursday requesting him "to come and bless the new team of PCC on the occasion of our taking charge" in Chandigarh, sources said.

They said the letter has been signed by 56 Congress MLAs.

Sidhu had sent an invitation signed by around 65 MLAs to Punjab Chief Minister Captain Amrinder Singh on Wednesday, sources had said.

After Sidhu's appointment, Thukral had said in a tweet on Tuesday that Sidhu had not sought time to meet the Chief Minister.

He also said that Chief Minister will not meet Sidhu "till he publicly apologises for his personally derogatory social media attacks against him".