Voting is currently underway in 34 constituencies across five districts of the state. 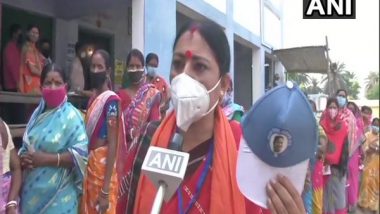 Purba Bardhaman, April 26: Bharatiya Janta Party (BJP) candidate Agnimitra Paul on Monday accused Trinamool Congress (TMC) agents of manipulating voters by wearing a cap with Chief Minister Mamata Banerjee's photo on it, at a booth in her constituency during the polling for the seventh phase of the assembly elections.

"TMC polling agent was wearing a cap with Chief Minister's photo on it, at a polling booth at Baktarnagar High School in Asansol Dakshin and when we complain about it, the presiding officer says that he is unwell and did not notice it," Paul, a candidate from Asansol Dakshin constituency, told ANI.

"EC has said that you cannot wear anything that has your party's symbol or a political leader's picture. It is Mamata Banerjee's trick. She knows people will not vote for her this time. Her time is up," she added. West Bengal Assembly Elections 2021 Phase 7: Voter Turnout of 37.72% Recorded Till 11:36 AM in Seventh Phase Polling.

The BJP leader, who cast her vote for the assembly election, further said that she will complain about it after getting out of the booth. Voting is currently underway in 34 constituencies across five districts of the state.