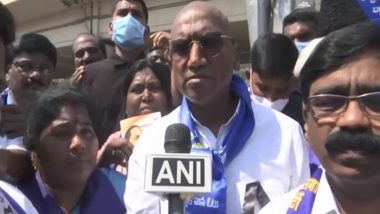 Earlier, interacting with the media, the Chief Minister had said, "We need to draft a new constitution of India. I firmly believe. So many nations, whenever they felt it necessary, they have rewritten their constitutions."

Speaking to ANI on the matter, Kumar said, "The constitution of India which has been responsible for the greatness of the country in the last 75 years, how can KCR say that there needs to be a change in the constitution. Whether he wants to change the constitution to continue the exploitation of people's land or continue the Dynasty rule in Telangana or he would blink on the unbridled corruption of his officials."

The BSP leader further demanded an apology from the Chief Minister and alleged that the BJP and TRS are conspiring to exploit the people.

"BJP and TRS conspired together for this and are coming together to exploit people, sell institutions, and privatize them. The constitution of India stands out among many of the best constitutions of the world. The constitution is not KCR's property. KCR should issue an apology to all the Constitution-makers," he said.