Bhushan said there are other states too which are a matter of serious concern. They are Gujarat, Madhya Pradesh, Karnataka, Tamil Nadu, Chhattisgarh and Chandigarh which have recorded a surge in COVID-19 cases. 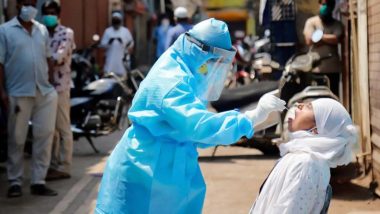 New Delhi, March 24: The surge of COVID-19 cases in Maharashtra and Punjab is of "grave concern", the Union health ministry said on Wednesday. Addressing a press conference, Union Health Secretary Rajesh Bhushan said the Centre held a meeting with health officials of Maharashtra and Punjab on Saturday to talk about refinement in their strategy to tackle the surge.

"Two states are of grave concern which showed recent surge in cases. First is Maharashtra and second is Punjab. Maharashtra reported over 28,000 cases. The top five districts are Pune, Nagpur, Mumbai, Thane and Nashik," he said.

Punjab is a cause for worry because the number of new cases are disproportionately high compared to its population, he said. Mumbai Reports 5,185 New COVID-19 Cases, 2088 Recoveries and Six Deaths in Past 24 Hours.

Jalandhar, SAS Nagar, Ludhiana, Patiala and Hoshiarpur in Punjab are reporting high number of cases, Bhushan added. Bhushan said there are other states too which are a matter of serious concern. They are Gujarat, Madhya Pradesh, Karnataka, Tamil Nadu, Chhattisgarh and Chandigarh which have recorded a surge in COVID-19 cases.

NITI Aayog member (health) V K Paul expressed concern about the pandemic with cases increasing in some states including Maharashtra, Punjab and Gujarat. "We have to battle this second peak", he said and stressed on following the COVID appropriate behaviour and using vaccination as a tool to curb transmission.

"Mask is as effective as the best vaccine in the world, why are we getting lax. Please get yourself tested, where tests are happening less, positivity is increasing. Large proportion of the population is susceptible," Paul said.

Karnataka and Tamil Nadu have also recorded recent surges. Karnataka is reporting about 2,000 cases daily while the number is about 1,400 in Tamil Nadu. Bhushan said there are roughly three per cent active cases of COVID-19 and these are concentrated mainly in 10 districts -- nine in Maharashtra and one in Karnataka. Holi 2021 Guidelines: Delhi, Mumbai Ban Public Holi Gatherings Amid Spike In COVID-19 Cases.

Nine out of the top 10 districts with the highest active number of COVID-19 cases - Pune, Nagpur, Mumbai, Thane, Nashik, Aurangabad, Nanded, Jalgaon and Akola - are in Maharashtra and one, Bengaluru Urban, is in Karnataka, he said.

According to the health ministry data of Wednesday, Maharashtra has reported the highest daily new cases at 28,699. It is followed by Punjab with 2,254 and Karnataka with 2,010 cases.