Rajesh Ranjan and Mahendra Verma, along with their team, on Monday said third wave peak of COVID could be around September - October this year. 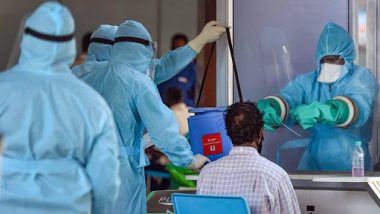 New Delhi, June 21: An IIT Kanpur study done by Prof. Rajesh Ranjan and Mahendra Verma, along with their team, on Monday said third wave peak of COVID could be around September - October this year.

"There is a significant anxiety among policy makers and public about the third wave. For the same, using SIR model, we have constructed the following three scenarios of a possible third wave using the epidemic parameters of the second wave. We assume that India is fully unlocked on 15 July. Scenario 1 (Back-to-Normal): Third wave peak in October but a lower peak height than the second wave. Scenario 2 (Normal with virus mutations): The peak could be higher than the second one and may appear early (September). Scenario 3 (Stricter interventions): The peak of the third wave could be delayed until late October with strict social distancing. Here, the peak will be lower than the second wave," a press statement said. COVID-19 Third Wave: No Data to Show Children Will Be Seriously Hit in Next COVID-19 Waves, Says AIIMS Director, Dr Randeep Guleria.

Profs. Rajesh Ranjan and Mahendra Verma, along with their team at IIT Kanpur, provide daily COVID-19 forecasts in India on covid19-forecast.org.

As per the assement from IIT Kanpur team,the second wave has waned significantly almost in every state except in some Northeast states (Mizoram, Manipur, Sikkim etc.).

"India's average daily case count has reduced significantly. As on 19 June, it is 63,000 compared the peak of about 4 lakhs. Most states have daily Test Positivity Rate(TPR) less than WHO recommended level (5%). However, Kerala, Goa, Sikkim, Meghalaya still have high daily TPR (>10%)," it said.

As per the study, India's daily Case Fatality Rate (CFR) has increased recently to 3.5 per cent, but the cumulative CFR of the second wave is comparable to that of the first wave.

"At present, the model does not include vaccination, which should decrease the peak significantly. Revised model with vaccination and with more recent data on the same is being worked out," the study says.

By end of this week, another study by IIT Kanpur on third wave is expected to come.