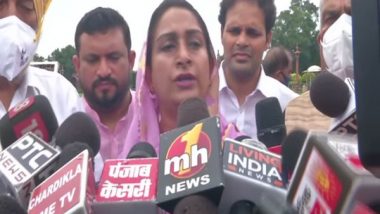 The delegation appealed to the President to ask the Centre to allow the opposition to discuss the farm laws and Pegasus issues in the Parliament.

"For two weeks, the opposition is keeping two demands to the central government in the parliament to let them speak on issues of national importance. All opposition parties are giving adjournment motions on the issues of farmers and Pegasus," said the SAD leader Harsimrat.

"We have come to the president to discuss the danger to the democratic process. People's voice outside the Parliament is being suppressed. You know what is happening with the farmers for one year," added Harsimrat.

Harsimrat further said, "Inside the Parliament, the voice of the representatives of the people is being suppressed. This is a loss of democracy and democratic institutions. We are small parties and have collected to appeal to the president to let the opposition discuss the issues".

"Why is the government running from discussing the issues of farmers and Pegasus? Make a joint select committee and put the MP's of the Rajya Sabha and Lok Sabha in it to solve the farmer issue since this government has failed," said the SAD leader.

"The president heard our appeal and said that would look into the matter," said Harsimrat.

The opposition parties have been forcing adjournments in both Lok Sabha and Rajya Sabha over their twin demands including repeal of three farm laws and probe into the allegations of surveillance. They also have been witnessing protests from the opposition since the start of the Monsoon Session on July 19. (ANI)