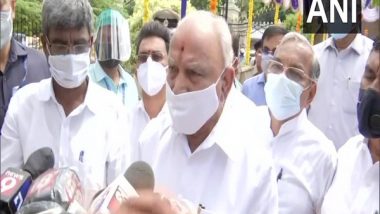 Bengaluru, June 6: Karnataka Chief Minister BS Yediyurappa on Sunday stated that he will resign from the post the day the party high command asks him to quit. While speaking to the media persons after paying a floral tribute to late former Chief Minister D Devaraj Urs at Vidhana Soudha, he said, "I will resign the day party high command asks me to quit. I do not speak about the rumours and the speculation created by some of the ministers and legislator."

"High command has given me the opportunity - I am trying to utilise it and I am trying to serve the people. I do not want to comment on the rumours of whoever speaks against me. If my high command wants me to resign, I will resign. I am myself involved working for the development of the state," he added. Yediyurappa further said that he will be the Chief Minister till the high command shows confidence in him.

"I do not feel that there is no alternate leadership in BJP in Karnataka. There are many leaders who are capable," he said. CP Yogeeshwara, state Tourism Minister, senior BJP leader and former Union Minister Basangouda Patil Yatnal and MLA from BJP Hubli, Aravind Bellad along with several BJP leaders have been making statements against Yediyurappa and demanded a leadership change in Karnataka. Karnataka Minister Arvind Limbavali To Take Legal Action Against Amazon Canada for Promoting Sale of Kannada Flag Coloured Bikini Along With State Emblem.

CP Yogeeshwara in a statement had said that the Chief Minister is not ruling, however, his son is ruling and controlling the Ministries of Karnataka. While, Basangouda Patil Yatnal had said that the leadership must be changed as his son is ruling the state. Several other leaders met High Command leaders and demanded for the leadership to be changed in Karnataka.

Meanwhile, Karnataka Deputy CM Dr CN Ashwathnarayan spoke in favour of the Chief Minister and said, "There is no question of him stepping down. No such discussions are happening. He only made a statement that he is willing to abide by whatever decision the party takes as he is a disciplined soldier of the party."