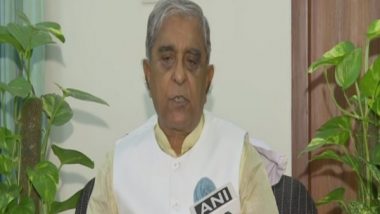 Speaking to ANI ahead of Uttar Pradesh Assembly elections, the BJP Rajya Sabha MP from Mainpuri said, "Akhilesh is nervous and scared. He is panicking these days. Sometimes rumours pour in that he will fight from Azamgarh, sometimes from Badaun, sometimes from Sambhal...The list is endless.."

"These days rumours are going on that he will play safe and will contest from Mainpuri's Karhal. Let me tell you all that if Akhilesh is going to contest elections from Karhal, considering that the seat as safe... he will lose very badly," he said.

"One must not forget that during the tenure of the Samajwadi Party, goons and mafias made it difficult for the common man to survive. Women and girls were unsafe and were forced to stay indoors," he added.

However, the SP chief on Wednesday said that he will contest the Uttar Pradesh Assembly elections from Karhal after taking permission from Azamgarh residents. Yadav is currently a Lok Sabha MP from Azamgarh.

Elections to the 403 assembly constituencies in Uttar Pradesh will be held in seven phases starting February 10.