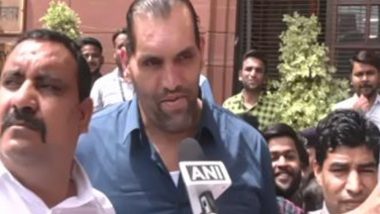 While speaking to ANI, Khali also said he is proud of joining the BJP.

"I came to meet Dr Jitendra Singh. Now, I am going back. I came to meet him as he belongs to hilly region and I too. It was just a regular meeting," Khali said

Asked about his joining the BJP, Khali said, "I am so proud of joining BJP. I joined the BJP after being impressed by the ideology of Prime Minister Narendra Modi." The Great Khali, Wrestler Dalip Singh Rana, Known For WWE Appearances, Join's BJP.

Khali is well-known in the WWE Universe where he battled professional wrestlers like Batista, Shawn Michaels and even John Cena and Kane. He was inducted into the WWE Hall of Fame Class of 2021. The wrestler, standing 7-foot-1, has appeared in films like "MacGruber," "Get Smart," and "The Longest Yard." He's also opened up a wrestling school, helping to get the next generation of Indian Superstar hopefuls ready for the ring.

His induction into the BJP occurred on the day of the first phase of polling in Uttar Pradesh. Then the BJP was gearing up for elections in four other states -- Manipur, Goa, Punjab and Uttarakhand -- in February and March. (ANI)