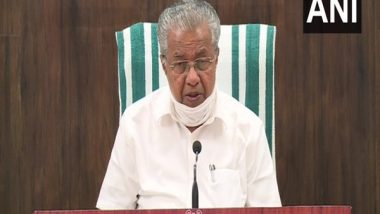 Replying to a notice of adjournment motion moved by Congress MLA PC Vishnunath on the issue, Chief Minister told the House, "The complainant is the daughter of an NCP leader. It is learned that the accused is another NCP worker. The minister himself has made it clear to the public that the dispute between them was being inquired by the minister, as an NCP leader."

Chief Minister said that regarding the delay in registering a case on the alleged sexual harassment complaint, the state police chief will investigate.

Regarding the complaint of the woman, Chief Minister said the woman had lodged a complaint at the Kundara police station on June 28.

"The case has been registered as Crime 1176/21 at Kundara Police Station under sections 354, 509, and 34 of IPC on 20.07.2021. The police chief is investigating a complaint that there was a delay in registering a case in this regard. The government will ensure that the nature of the complaint is properly investigated and appropriate action is taken by the police," the Chief Minister said.

Moving the notice of adjournment motion Congress MLA PC Vishnunath demanded the resignation of the Forest Minister terming that the minister has violated the oath of office by intervening in settling sexual harassment complaints.

Leader of Opposition VD Satheesan alleged that Chief Minister was supporting Saseendran by raising weak arguments and the police had 'put on freezer' a woman's complaint without registering FIR for 22 days.

"This is a gross violation of prescribed norms when it is a Cognizable offense. Clearly, the minister intervened after knowing it is a complaint from a woman which is evident in the phone conversation that was aired by channels," he said.

With the Speaker denying a discussion, after Chief Minister's reply, the UDF-led opposition staged a walkout from the assembly. (ANI)