Get latest articles and stories on India at LatestLY. Karnataka Chief Minister Basavaraj Bommai said on Saturday that the state government will regularise services of Pourakarmikas working on direct payment. 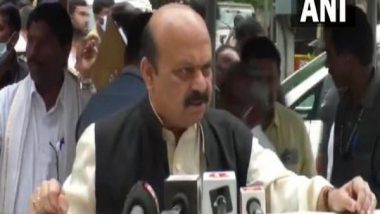 This came after pourakarmikas across Karnataka launched an indefinite strike starting Friday at Freedom Park in Bengaluru for the regularisation of their services.

"The state government will regularise services of Pourakarmikas working on direct payment. We have agreed to extend social security, medical service, and assistance for the education of children of Pourakarmikas. Necessary rules will be formulated during the next assembly session," Bommai told reporters today.

The pourakarmikas are demanding dignified working conditions, provision of safety equipment, post-retirement benefits, and permanency of jobs, along with other welfare measures. They alleged that the issues have been consistently ignored by the state government.

Meanwhile, Aam Aadmi Party (AAP) leaders joined the pourakarmikas who are protesting at Freedom Park demanding redressal of their problems.

AAP state vice-president Bhaskar Rao said that protesting pourakarmikas have complete support from the party. He demanded that the jobs of pourakarmikas must be made permanent.

"If pourakarmikas refuse to work even for a single day, the waste disposal problem will worsen and people will have to close their noses. Sanitation workers, including cleaners and sweepers, are paid a meagre salary. They are unable to meet their basic needs with this salary. So, their jobs must be made permanent," said Rao.

In 2017, he said the Siddaramaiah government had proposed in the cabinet to regularise pourakarmikas, which was approved but implementation failed.

"Under the Special Recruitment Rules 2017, only those who clean roads were treated as pourakarmikas. Sewage cleaning workers, garbage collectors, garbage truck drivers, garbage loaders, and helpers are working on a contract basis. Government facilities must be made available to them," Rao emphasized.