'Made in India' Sputnik V COVID-19 doses are likely to be available from September-October, said Dr Reddy's Laboratories on Monday. 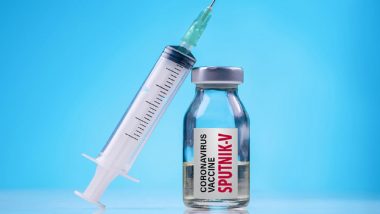 New Delhi, August 2: 'Made in India' Sputnik V COVID-19 doses are likely to be available from September-October, said Dr Reddy's Laboratories on Monday.

Speaking to ANI, Dr Reddy's Laboratories said, "We expect that locally manufactured doses are likely to be available from the September-October period." Sputnik V COVID-19 Vaccine Production Started in India by Morepen Labs.

Dr Reddy's Laboratories and Russian Direct Investment Fund (RDIF) signed an agreement for the distribution of the Sputnik V vaccine in India.

"The Sputnik V vaccination launch we initiated as a pilot in May 2021 has seen gradual and steady commercial scale-up and roll-out all over India since then, having now reached around 80 cities in India. We have partnered with major hospitals around the country and set up our cold chain infrastructure across more than 300 locations since the vaccine requires -18 degree C temperature," it added.Recently Russian Direct Investment Fund (RDIF) also issued a statement and said that the production of Russia's Sputnik V in India is expected to come fully on stream in September.

"Production in India is expected to come fully onstream in September and RDIF expects India to become a major production hub for the Sputnik V vaccine with such companies as Serum Institute of India, the world's biggest vaccine producer, Gland Pharma, Hetero Biopharma, Panacea Biotec, Stelis Biopharma, Virchow Biotech and Morepen Laboratories working to produce the vaccine," the RDIF said.