Get latest articles and stories on India at LatestLY. Eyewitnesses of the Mundka fire incident were horrified after they came across a "cloud of smoke rising" all of a sudden. 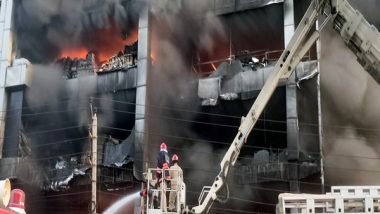 Visual from the spot on Friday (Photo:ANI)

New Delhi [India], May 14 (ANI): Eyewitnesses of the Mundka fire incident were horrified after they came across a "cloud of smoke rising" all of a sudden.

The fire incident in a four-story building on Friday evening has claimed 27 lives so far, leaving many injured, who were admitted to the Sanjay Gandhi Memorial Hospital where a help desk has been set up.

Also Read | Odisha Chapter of the Indian National Trust for Art and Cultural Heritage Has … – Latest Tweet by IANS India.

The people with minor injuries were released after primary treatment, as per an official.

An eyewitness, Bimla, said that when the building caught fire, the windows were broken in utter chaos.

"We were all sitting in a meeting. The power went off suddenly and someone said that a cloud of smoke is rising. There was chaos, windows were broken and people threw ropes at us to get down," she said at Sanjay Gandhi Memorial Hospital.

"I knew almost everyone in the meeting. But I don't know where are they now," she added.

Another eyewitness said that they did not know when did the fire break out and it was soon that the fire blocked the only exit in the room.

"We were sitting in a meeting, I don't know when did fire break out. There was no way to get out. There was only one exit which was already engulfed in fire. We were on the third floor. There were 250-300 people there," she said.

A man, Santosh Kumar, whose wife is missing since the incident, said that he is not yet aware of the whereabouts of his wife.

"She worked there. When we went there after the fire incident, we were told to come to the hospital here. We were not allowed to enter the emergency ward here. Later we were allowed, but she was not here. We have filed a missing report. We do not know if she is even alive," he said narrating the horror.

"We are being tossed in between different hospitals for the information. We were pestered the entire night," he added.

Meanwhile, the massive fire was brought under control at night. The search and rescue operation was carried out by the National Disaster Response Force (NDRF) team. The operation continued till almost noon.

As many as 27 people were confirmed to be dead so far, out of which 25 are yet to be identified.

Deputy Commissioner of Police outer district Sameer Sharma informed that the relatives of the 27 bodies which were recovered from the site of the incident are being called and proper slot-wise identification is being done.

Earlier today, Delhi Chief Minister Arvind Kejriwal reached the fire incident site and said that the government has ordered a magisterial enquiry into the incident.

The Chief Minister also announced a compensation of Rs 10 lakhs for the family of the deceased while the injured will be given Rs 50,000 as ex-gratia. (ANI)