Haryana Chief Minister Manohar Lal Khattar on Wednesday said that there was no proof as to who targeted the 50,000 smartphone numbers in 'Pegasus' spyware row, adding that even his number could be on the database. 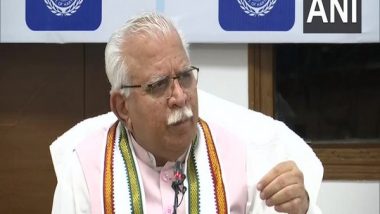 Chandigarh (Haryana) [India], July 22 (ANI): Haryana Chief Minister Manohar Lal Khattar on Wednesday said that there was no proof as to who targeted the 50,000 smartphone numbers in 'Pegasus' spyware row, adding that even his number could be on the database.

Khattar's remarks came after various reports said that Pegasus has been linked to a list of 50,000 phone numbers, including those of politicians, journalists, activists, and business executives around the world.

The names of over 40 Indian journalists appeared on the leaked list of potential targets for surveillance by an unidentified agency using Pegasus spyware, according to a report published in The Wire on Sunday.

"Even my mobile number could be on the database which is the source of media reports. Those 50,000 mobile numbers released worldwide could have been targets. But there is no proof as to who targeted these numbers," Khattar said.

Responding to claim that the Israeli spy software, Pegasus is only sold to government agencies, Khattar said that it might be a possibility that private agencies are procuring it secretly.

Pegasus malware, created by Israel's NSO Group, has been hogging the limelight since at least 2016 when researchers said it had been used to spy on a dissident in the United Arab Emirates.

According to the report, the journalists who were targeted work for some news organisations in the country including Hindustan Times, The Hindu, India Today, Indian Express and Network18. Many of them cover matters related to Defence, Home Ministry, Election Commission and Kashmir among others.

However, Union IT Minister Ashwini Vaishnaw on Monday said there is 'no substance' in the media report regarding the use of Pegasus on WhatsApp, adding that the report was an attempt to malign Indian democracy and its well-established institutions.

On July 19, the Bharatiya Janata Party hit out at the Congress for accusing the government of its role in the alleged illegal surveillance of journalists using Pegasus spyware and said that there is not a shred of evidence that shows the linkage of the government or the BJP.

Outrightly rejecting the allegations, BJP leader Ravi Shankar Prasad termed it as a pre-planned strategy by some to raise the Pegasus story just before the Monsoon session of the Parliament. (ANI)