Annular Solar Eclipse 2020 Can be Seen at Home on Sunday Via Pinhole Camera: Experts 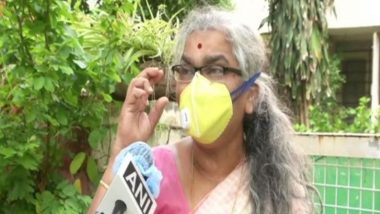 New Delhi, June 20: Unlike before, people would not be able to view the annular solar eclipse on Sunday from an observatory or a planetarium as large gatherings are prohibited in the wake of COVID-19. However, Nandivada Rathnasree, director at the Nehru Memorial Museum and Library, said that it is still possible to see the annular eclipse at home via a pinhole camera.

"Take a piece of cardboard and make a small hole in it and put the cardboard down and make see the shadow of the cardboard -- you would be able to see that hole. If you lift the cardboard slowly, you would see the shape change," Rathnasree told ANI. Solar Eclipse 2020 Timing in Delhi, Mumbai, Bengaluru, Chennai And Other Indian Cities: Know When The June 21 Surya Grahan Will be Visible in Your City.

But one can view the eclipse even without a pinhole camera. "If you look around, you would see nice circular pinhole images of the sun under the trees," RC Kapoor, a Bengaluru-based astrophysicist suggested that if people do not have a safety shield to view the annular eclipse, people can view the solar eclipse via television.

"It is advised to not look at the sun with a naked eye as it may be hazardous," he advised. He further said: "Every eclipse has a significance which tells us that it is a game of shadows, a natural phenomenon and people need not be afraid of it."

With regard to the claim that the annular eclipse may resolve the coronavirus  crisis, he said that "it is not possible as none of the two are related". A rare celestial event, annular solar eclipse, which is popularly known as the "ring of fire" eclipse, will be visible this Sunday in India.

It will be the first solar eclipse of this year taking place on the summer solstice, which is the longest day in the Northern Hemisphere. Solar Eclipse 2020 Timing in Delhi And Live Webcast: Watch 'Surya Grahan' on Sunday From 10.20 AM to 1.48 PM Online on space.com; Here Are All Details.

While people living along the path annular eclipse passing through Anupgarh, Suratgarh, Sirsa, Jakhal, Kurukshetra, Yamunanagar, Dehradun, Tapowan and Joshimath will be able to see the annular phase, people in rest of India can witness a partial eclipse, said the Ministry of Science and Technology.