The Congress is likely to declare its chief ministerial face for Punjab on February 6 when former party chief Rahul Gandhi will visit the poll-bound state, party sources said. 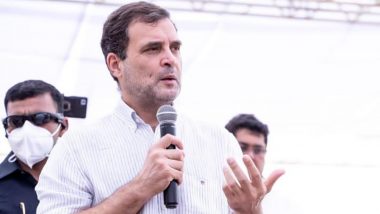 Rahul Gandhi had announced during his last visit to Punjab on January 27 that the Congress will go into the Punjab Assembly election with a CM face and the decision on it will be taken soon after consulting party workers. Also Read | Samajwadi Party Leader Ram Gopal Yadav Says 'No Need To Provide Booster Doses for COVID-19 in India'.

The party has also sought the opinion of common people on the issue and the process has started in the last two days. The sources said Rahul Gandhi is likely to visit Punjab on Sunday, February 6, and may make the important announcement.

Over the past several weeks, Punjab Chief Minister Charanjit Singh Channi and state Congress chief Navjot Singh Sidhu have, directly or indirectly, made a case for themselves to be declared as the party's chief ministerial candidate.

The Congress appears to be putting its weight behind Channi, who belongs to the Scheduled Caste community and has been fielded from two assembly seats of Chamkaur Sahib and Bhadaur.

The SCs and STs have been a traditional vote bank of the Congress, but they drifted away from the party following the emergence of the Bahujan Samaj Party (BSP) and some other small groups.

The Congress is now seeking to consolidate the SC vote bank, which comprises almost one-third of Punjab's population, by choosing Channi to replace former chief minister Amarinder Singh. A three-time MLA from Chamkaur Sahib, Channi is the first Dalit chief minister of Punjab.

He is the only party candidate to be fielded from two seats. The Congress has followed the 'one family, one seat' formula in allocating tickets to its candidates in Punjab. Rahul Gandhi while addressing a virtual rally in Jalandhar last week had said that Channi and Sidhu have assured him that whosoever is chosen as the CM face, the other will support him.

Gandhi made the statement after Sidhu at the rally demanded that the party declare the CM face for the polls and said he doesn't want to be a "showpiece". Differences in the party continued to simmer even after the ouster of Amarinder Singh and Channi's elevation to the post.

The Congress is seeking to retain power in Punjab and is pitted against the AAP, the SAD-BSP and the BJP that has joined hands with Amarinder Singh's Punjab Lok Congress and Sukhdev Singh Dhindsa's Shiromani Akali Dal (Sanyukt).