The unaccounted/illegal consignments seized with apprehended persons were handed over to the concerned Law Enforcement Agency. Smuggling of Wildlife, animal parts and forest products is a crime against Nature. 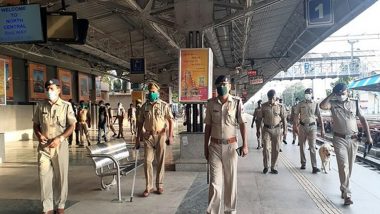 New Delhi, February 17: The Railway Protection Force (RPF) personnel in January this year saved a total of 1045 children, including 344 girls, who were vulnerable to being exploited and trafficked, if not secured in time, the Railways said on Thursday. This was part of 'Operation Nanhe Fariste' carried out by RPF. Presently Child Help Desks are functional at 132 railway stations across the Indian Railways. According to the official release, RPF under 'Mission Jeewan Raksha', saved 42 persons, including 20 males and 22 women, under this mission during January 2022.

RPF has been saving lives of persons in danger of coming under the wheels of running trains at various railway stations and railway areas night and day going beyond their call of duty risking their own lives. The release also read that to provide better security to women passengers, several new initiatives were taken under the code name "Mahila Suraksha".

During the month of January 2022, the RPF deployed 'Meri Saheli' teams at major railway stations with an objective to provide security to women passengers especially travelling alone and vulnerable to crime and covered approximately 13,000 trains all over India for this purpose. Uttar Pradesh Shocker: Railway Trackman Commits Suicide by Laying Down on Railway Track After He Was Denied Leave To Attend Brother-in-Law’s Wedding.

"RPF personnel especially ladies' personnels, who currently form about 9 per cent of the total strength, go out of the way to help pregnant women who go into labor during their train journeys, in childbirth under 'Operation Matrishakti'," reads the release. Under operation 'Yatri Suraksha', RPF has arrested more than 300 criminals involved in 254 cases of offences against passengers and handed them over to concerned GRP/Local Police.

"To curb the menace of Human Trafficking through railways, RPF has been working in coordination with other stakeholders round the clock. Taking action under the code name Operation 'AAHT', RPF has rescued 35 persons (22 minors) with the arrest of 08 traffickers in the month of Jan 2022 and handed them over to Police," says the official statement.

In order to give focused attention to drive against smuggling of narcotics through rail, RPF has launched 'Operation NARCOS'. Under this operation, RPF has recovered. Narcotic products valued at Rs. 4.57 Crores with the arrest of 87 persons during the month of Jan. 2022, Transportation by trains has become a major conduit for tax evaders/lawbreakers.

The unaccounted/illegal consignments seized with apprehended persons were handed over to the concerned Law Enforcement Agency. Smuggling of Wildlife, animal parts and forest products is a crime against Nature. RPF has been alive to the issue and has taken stringent action under 'Operation WILEP' against the smugglers involved in the illegal trade of wildlife through railways.

In the month of Jap 2022, RPF detected 11 cases with the arrest of two persons and handed over the recovered items like rare turtles, various species of wild birds, endangered vultures to the forest department.