Rajasthan Chief Minister Ashok Gehlot said on Wednesday that Rajasthan Eligibility Examination for Teacher (REET) examination will take place in July this year, with a total of 62,000 posts up for grabs currently. 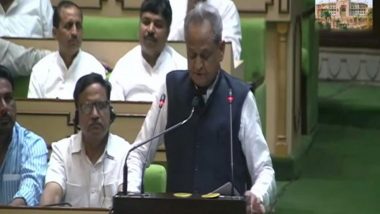 Jaipur, February 23: Rajasthan Chief Minister Ashok Gehlot said on Wednesday that Rajasthan Eligibility Examination for Teacher (REET) examination will take place in July this year, with a total of 62,000 posts up for grabs currently. Gehlot said this during his state budget speech in the legislative assembly.

"REET exam will be conducted in July this year, with a total of 62,000 posts available," said Gehlot. "36 women universities will be opened in 19 districts of the state. 3,820 schools till class 12 will be developed in the state and new medical colleges will be opened. An educational hub will be developed in Jaipur. English schools will also be opened," added Gehlot. Rajasthan Budget 2022–23: Government Restores Older Version of Pension Scheme.

He also said that to compensate for the loss in education due to COVID-19, a 3-month bridge course will be conducted next year for school students at a cost of 20 crores. The Chief Minister noted that a lot of improvement had taken place in the government educational institutes and enrollment rates. During the budget, the first-ever agriculture budget was also introduced for the state, and Gehlot assured that steps will be taken to strengthen the farmers of the state.

With regards to employment, Gehlot said that a total of 1,00,000 new jobs will be created in the state.Gehlot said that a lot of emphasis has been laid on healthcare services in the budget. "I declare that outdoor, indoor OPD, IPD facilities in all government medical institutes of the state will be free of cost for the people. There Is an Undeclared Emergency, Says Rajasthan CM Ashok Gehlot on PM Modi’s Congress Attack in Parliament.

Also, under the Chiranjeevi Accident Insurance Scheme, free of cost insurance up to Rs 5,00,000 will be available to people," he added. Gehlot proposed free electricity up to 50 units, a grant of Rs 3 per unit from 50-150 units, and a grant of Rs 2 for those using 150-300 units. In view of rising road accidents, It has also been decided to bring a Road Safety act, said the Chief Minister.

Gehlot announced that 25 bighas of land will be given to Paralympic winners from the state. He announced the facility of a transit hostel in the Udaipur House, Delhi. (ANI)