Get latest articles and stories on India at LatestLY. The river bed of Hathni Kund barrage on Wednesday has sunk 14m down. 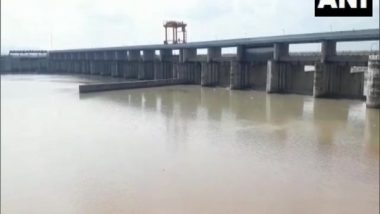 A visual of the Hathni Kund barrage

Yamunanagar (Haryana) [India], May 25 (ANI): The river bed of Hathni Kund barrage on Wednesday has sunk 14m down.

"When Hathni Kund barrage was constructed its river bed was made at 329 meters which has sunk down by 14 meters, this can be dangerous," RS Mittal, Superintendent Engineer, Irrigation department told ANI.

"We took this matter to Central Water Commission (CWC) and CWC had referred Central Water and Power Research Station (CWPRS) Pune for moral study. A report from CWPRS has come and a meeting took place which was attended by chief engineers," he added.

Regarding the precautionary measures, Mittal said that a sewer will be built 500 metres below the Hathni Kund barrage.

"We will build sewer 500 meters below Hathni Kund barrage and CWC is designing it. We are waiting for a report from CWC, once we get the report, we will start the tender process," said Mittal. (ANI)