Earlier in June, Russell's viper was rescued by a private snake catcher from a house in the outskirts of Coimbatore. 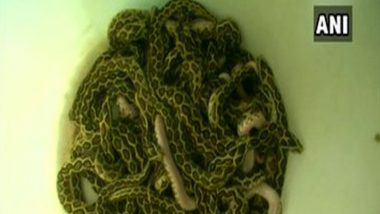 "Recently in our zoo, one of Russell's viper snake gave birth to 33 snakelets. The specialty of this snake is that it can give birth to 40-60 snakes. All the young ones are in a healthy state but we would not be maintaining all of them," Senthil Nathan, Zoo director told ANI. Russell's Viper Snake Gives Birth to 35 Snakelets While Being Rescued From Bathroom in Coimbatore, View Pics!.

He added that the snakes would be handed over to the forest department. "We would hand over all the young ones to the forest officials. But not all of them would be able to survive in the forest because of the predators," he said.

Nathan further said that a few years ago, another snake had given birth to sixty babies. Earlier in June, Russell's viper was rescued by a private snake catcher from a house in the outskirts of Coimbatore.

A man residing on the outskirts of Coimbatore went into a deep shock on Friday when he noticed a big snake in his bathroom. Later, the Kovil Medu resident sought the help of a private snake catcher team which identified the snake as Russell's viper, one of the most venomous snakes. During the rescue operation, the snake gave birth to 35 snakelets. The snake was released into Anaikatti forest Range in the evening.