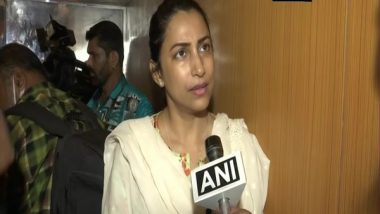 Kranti Redkar has also sought time from the Maharashtra CM to meet him but has not received any response yet.

In her letter to Uddhav Thackeray, Sameer Wankhede's wife said, "I grew up as a Marathi girl in view of Shiv Sena fighting for the justice of Marathi man since childhood. Learned from Balasaheb Thackeray and Chhatrapati Shivaji Maharaj that we must not do injustice to anyone, do not tolerate injustice on yourself."

"I am standing alone against those who are attacking my personal life privately every day on social media. We are being insulted by people every day. A woman's dignity is being toyed with in Chhatrapati Shivaji Maharaj's state. Had Balasaheb been here today, he would not have liked it," her letter in Marathi read.

"He (Balasaheb) is not here today but you are. We see him in you, we trust you. I believe that you will not allow injustice to my family and me. As a Marathi, I look towards you with hopes of justice. I request you for justice," her letter added.

She further said, "I have sought time from Maharashtra CM Uddhav Thackeray in order to meet him. I have not received a response so far, I am waiting for a reply."

Notably, in the drug-on-cruise case, Maharashtra Minister Nawab Malik had accused the zonal director of NCB Sameer Wankhede of favouritism. Along with this, he also made serious allegations like extortion and has also raised questions on Wankhede's birth certificate and marriage.

Malik had posted purported pictures of the 'nikah' of Wankhede. The NCP leader also posted a screenshot of the 'Nikah Nama' of Wankhade with his first wife Dr Shabana Quraishi. Following this, Wankhede's wife Kranti Redkar said that Wankhede's 'nikah' had taken place and the marriage had been registered under the Special Marriage Act.

Meanwhile, Sameer Wankhede's sister Yasmeen Wankhede on Wednesday alleged that Malik has been stalking and threatening her online. She requested the National Commission for Women to register a complaint in the matter.

An NCB team busted an alleged drugs party on the Cordelia Cruise ship, which was on its way to Goa at mid-sea on October 2.

A total of 20 people, including Bollywood actor Shahrukh Khan's son Aryan Khan, have been arrested so far in the case.