The Supreme Court on Wednesday dismissed a plea of the Maharashtra government seeking direction to the Centre to disclose the Socio-Economic and Caste Census 2011, raw caste data of Other Backward Classes (OBC) after the Centre submitted that the data collected is flawed and unusable. 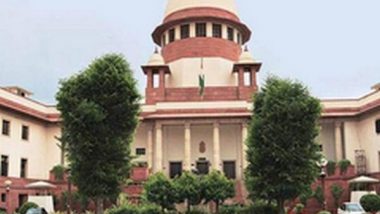 New Delhi, December 15: The Supreme Court on Wednesday dismissed a plea of the Maharashtra government seeking direction to the Centre to disclose the Socio-Economic and Caste Census 2011, raw caste data of Other Backward Classes (OBC) after the Centre submitted that the data collected is flawed and unusable.

A Bench of Justices AM Khanwilkar and CT Ravikumar dismissed the petition of Maharashtra after taking note of the stand of the Central government that the SECC-2011 was not accurate and fraught with mistakes. Also Read | Supreme Court Commutes Death Penalty of Man Convicted for Rape, Murder of Three-Year-Old in 2016.

To this, the apex court said that it cannot issue a direction to the Centre to share the raw caste date of SECC-2011 with Maharashtra. Also Read | Meta, CBSE Expand Partnership to Enable Over 10 Million Students to Embrace Immersive Tech.

When the Central government's stand is that the data which was collated is not accurate and not usable, then we fail to understand how direction can be issued to permit the State of Maharashtra to use the date for any purpose, the Bench said.

"Such direction will lead to confusion and uncertainty, which cannot be countenanced. We, therefore, decline to entertain this writ petition," the Bench said in its order.

During the hearing, Solicitor General of India Tushar Mehta, appearing for the Centre, argued that the raw census data of SECC 2011 cannot be shared as it is "useless" and "worthless".

Mehta added that the SECC 2011 was not meant to collect data of OBCs, and the enumerators were not equipped to deal with OBC information and therefore data cannot be utilised.

Earlier, the Centre had filed an affidavit in the top court saying the exclusion of any caste other than Scheduled Caste and Scheduled Tribe from the purview of the upcoming 2021 Census is a "conscious policy decision" taken by the Central government.

The Ministry of Social Justice and Empowerment had said that census of backward classes is "administratively difficult" and will suffer both on account of completeness and accuracy.

The affidavit of the Central government was filed on a plea of the Maharashtra government asking to share census data of OBCs collected by the Centre in 2011-2013.

The Maharashtra government had sought directions to the Centre to disclose the SECC 2011, raw caste data of OBC and to gather data of socio-economic to the extent relating to the caste of citizens of rural India in its 2020 Census.

The Centre in the affidavit had said that in such a situation any direction from Court to census department to include enumeration of Socio-Economic data to the extent relating to Backward Class Of Citizens of rural India in upcoming census 2021 as sought by the State of Maharashtra would "tantamount to interfering with a policy decision".

It had said that on January 7, 2020, the Central government had issued a notification prescribing a series of information to be collected during Census 2021 and it includes information relating to Scheduled Caste/ Scheduled Tribe, it does not refer to any other caste.

The Centre had added that the inaccuracy of the data is evident from the infirmities of the SECC 2011 data making it unusable for any official purpose and can therefore not be mentioned as a source of information for population data in any official document.

The plea of Maharashtra government had sought directions to the Centre to disclose the SECC- 2011 raw caste data of Other Backward Classes, and in case they are unwilling or not in a position to do the same, permit the State to collect such empirical data regarding OBCs within the State.