Get latest articles and stories on India at LatestLY. The National Investigation Agency (NIA) on Saturday arrested two people in The Resistance Front case, a frontal outfit of proscribed terrorist outfit Lashkar-e-Taiba(LeT), after conducting raids at four locations in Kashmir, the agency said. 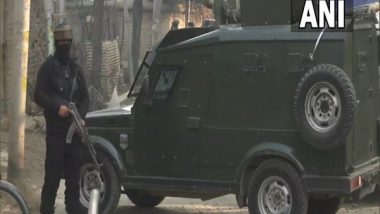 The arrested were identified as Muzamil Mushtaq Bhat and Fayaz Ahmad Khan, both residents of Jammu and Kashmir.

The agency conducted raids in the districts of Baramulla, Kupwara, Pulwama and Shopian in Jammu and Kashmir. Based on these searches, the two overground workers of TRF, who are in contact with their Pakistan-based handlers were arrested for providing logistics support for terrorist activities, spreading terrorist propaganda, radicalizing, and recruiting new members to TRF.

During the raid, the NIA seized digital devices (mobile phones, laptops, SIM cards, and memory cards) and incriminating material used for the fabrication of IEDs, Jihadi literature, and posters.

Agency said that the case is related to the activities of 'The Resistance Front (TRF), an offshoot of LeT, and its self-styled commander Sajjad Gul, who has been actively radicalizing, motivating, and recruiting the youth of Jammu and Kashmir for indulging in violent activities in the Union Territory (UT) and other parts of India.

Gul along with his other associate commanders of LeT based in Pakistan have been recruiting individuals (Over Ground Workers) to conduct reconnaissance of pre-determined targets, coordinating and transporting arms and ammunition, and explosives to support the terrorists of LeT and TRF in order to launch attacks on the security forces and execute targeted killings.

The anti-terror agency registered a case on November 18 last year under various sections of the Indian Penal Code, and sections 13, 17, 18, 18B, 38, and 39 of the Unlawful Activities (Prevention) Act.

Four terrorists of (TRF) are wanted by the NIA in the case related to a conspiracy hatched for radicalising, motivating and recruiting the youth of Jammu and Kashmir to effect violent activities in the Union Territory and the rest of India, the agency said.