Samajwadi Party MP Jaya Bachchan on Monday congratulated the Indian Women Hockey team for their performance and hoped that the team bags a gold medal in this year's Tokyo Olympics. 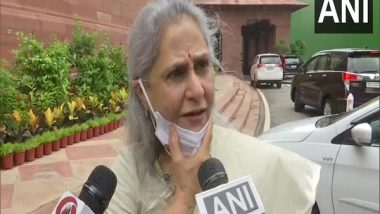 Speaking to ANI, Jaya Bachchan said, "I hope the women's hockey team advances to the final and wins it, and makes the country proud."

"I am very happy to hear this news. My best wishes are with the team," she added.

Sports Minister Anurag Thakur on Monday congratulated the Indian women's hockey team for making history and reaching the semi-finals of the Olympics for the first time. India beat Australia 1-0 as they moved into the semis at the Tokyo Olympics.

Union Law Minister Kiren Rijiju also congratulated the team for reaching the semi-finals in what was a splendid display from the Women in Blue.

Also, Congress General Secretary Priyanka Gandhi Vadra on Monday congratulated the Indian women's hockey team as they made it to the semi-finals for the first time in the ongoing Tokyo Olympics.

The Indian women's hockey team created history on Monday here at Oi Hockey Stadium -- North Pitch -- as they qualified for the semi-finals of the Olympics for the very first time after defeating Australia 1-0.

In what comes as a historic day and possibly the greatest moment for women's hockey in India, Gurjit Kaur scored the lone goal in the match during the first half through a penalty corner in a very tightly contested match. The Indian players looked to give it their all as they ensured Gurjit's effort didn't go in vain.

The Australians threw it their all, but the Indian women refused to buckle even though the Aussies kept piling the pressure with each passing minute. (ANI)