Get latest articles and stories on India at LatestLY. The Uttar Pradesh Police have made security arrangements for 'darshan' of deity by devotees during the ongoing Gyanvapi Mosque survey in Varanasi on Saturday. 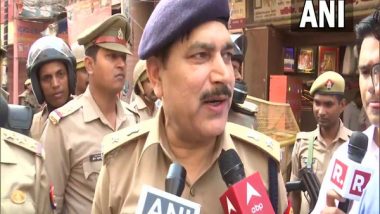 Varanasi (Uttar Pradesh) [India], May 14 (ANI): The Uttar Pradesh Police have made security arrangements for 'darshan' of deity by devotees during the ongoing Gyanvapi Mosque survey in Varanasi on Saturday.

"There is a robust arrangement to ensure that the people don't face any inconvenience, the darshan takes place well and everything goes on well," said RS Gautam, Deputy Commissioner of Police, Kashi Zone.

The survey began at 8 AM after the officials entered the underground cell and started videography.

Ahead of the survey, all the shops within the 500-meter radius of the area have been shut.

Five women had filed a petition in the court seeking permission for daily worship at the Shringar Gauri temple, which is allegedly situated inside the Kashi Vishwanath-Gyanvapi Mosque premises.

Another petition, which was filed by one Vijay Shankar Rastogi, had contended that the entire premises belonged to the Kashi Vishwanath and that the Gyanvapi Mosque is only a part of the Temple, is also pending in the court since 1991.

Rastogi had also claimed that the Kashi Vishwanath Temple had been built over two thousand years ago and the temple was demolished by the Mughal emperor Aurangzeb. (ANI)