Get latest articles and stories on India at LatestLY. In view of the thronging pilgrims in Kedarnath Dham, Rudraprayag District Magistrate Mayur Dixit has banned VIP Darshan for the Dham. 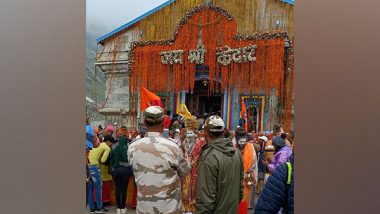 Dehradun (Uttarakhand) [India], May 13 (ANI): In view of the thronging pilgrims in Kedarnath Dham, Rudraprayag District Magistrate Mayur Dixit has banned VIP Darshan for the Dham.

In an order by the state government, people are seen stranded in crowded lines to reach the temple despite the availability of the helicopter facility.

"Huge crowd of pilgrims is seen in Kedarnath Dham despite repeated appeals from Chief Minister, State Government and Administration", informed the official.

The yatra began with the opening of Gangotri and Yamunotri portals for devotees on May 3, on the occasion of Akshay Tritiya in the presence of Chief Minister Pushkar Singh Dhami. While Kedarnath re-opened on May 6, the doors of Badrinath opened on May 8.

According to the Uttarakhand government, 7,000 pilgrims will be allowed daily at Gangotri, 15,000 at Badrinath, 12,000 at Kedarnath, and 4,000 at Yamunotri. This arrangement has been made by the government for 45 days. Notably, Gangotri, along with Yamunotri, Kedarnath and Badrinath, are the four most revered Hindu pilgrimages in the Himalayas. (ANI)