Villagers had to carry a 26-year-old pregnant woman on a cot for 10 km on Wednesday so that she could get healthcare facilities due to lack of proper roads in Kinneralova village of Teegalavalasa panchayat in Hukumpeta Mandal in Visakhapatnam. 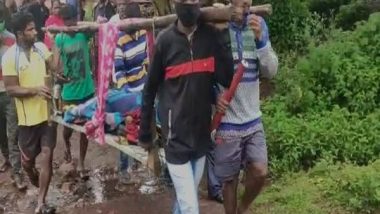 Visakhapatnam (Andhra Pradesh) [India], June 10 (ANI): Villagers had to carry a 26-year-old pregnant woman on a cot for 10 km on Wednesday so that she could get healthcare facilities due to lack of proper roads in Kinneralova village of Teegalavalasa panchayat in Hukumpeta Mandal in Visakhapatnam.

The woman named S Chilakamma who suffered labour pains, was carried till a road point wherein she was moved into an ambulance which arrived from Teegavalasa junction and later shifted to Hukumapeta's hospital through ambulance.

Tribal leaders in the area demanded roads for their villages. Villagers face problems when an ambulance also can't reach their village in emergencies. Locals said that people in tribal areas still continue to take pregnant women to health centres in these 'dolis'. They have to trek long distances to reach a road where ambulances can reach, locals say.

While speaking to ANI, a local in the area said, "No vehicles can enter the village as the road is not in a proper condition. Even rice availed from ration cards has to be carried in buckets from house to house from nearby Mandal's headquarters. We request the government to intervene in this matter and take steps to save lives by providing road access to Kinneralova hamlet, so that an ambulance can reach here on time, if needed in future."

In August 17, 2020, the Ministry of Tribal Affairs launched the Tribal Health and Nutrition Portal 'Swasthya' and opened National Overseas Portal and National Tribal Fellowship Portal. The e-portal on tribal health and nutrition named 'Swasthya' is a first of its kind e-portal, providing all health and nutrition-related information of the tribal population of India in a single platform.

Swasthya curates innovative practices, research briefs, case studies, and best practices collected from different parts of India to facilitate the exchange of evidence, expertise and experiences. The Tribal Affairs Ministry has recognized Piramal Swasthya as the Centre of Excellence for Knowledge Management (CoE for KM) for Health and Nutrition. The CoE will constantly engage with the Ministry and provide inputs to drive evidence-based policy and decision-making pertaining to health and nutrition of the tribal population of India. (ANI)