Speaking to ANI, Dass said: "Assam election campaign is in full swing. But top BJP leaders are keeping a distance from the issue of CAA, as after its approval from Parliament, Assam witnessed a lot of protests against the law." 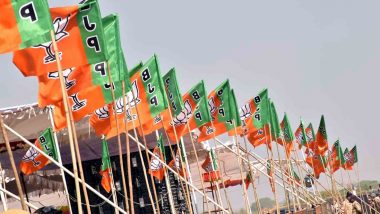 Majuli, March 22: Ahead of Assam Assembly elections, state BJP chief Ranjeet Kumar Dass said that the party will soon implement Citizenship Amendment Act (CAA). Speaking to ANI, Dass said: "Assam election campaign is in full swing. But top BJP leaders are keeping a distance from the issue of CAA, as after its approval from Parliament, Assam witnessed a lot of protests against the law."

The state BJP chief in Majuli said today: "We have passed the Bill in the Parliament and we stand by it. Once the regulation for it is completed, and if we come back to power in Assam, we will implement CAA. There is no question of going back on the issue even during election time." Assam Assembly Elections 2021 Dates: Polling in 3 Phases on March 27, April 1 And April 6, Results on May 2; Check Full Schedule.

Upon being questioned about Congress leader Rahul Gandhi's promises that they will not allow CAA to be implemented in Assam, Ranjit Dass said: "I can bet that Rahul Gandhi doesn't know anything about CAA. Even our booth level workers know more about CAA than Gandhi."

"There will be no impact (of CAA) on Assembly elections and the people of Assam had earlier displayed it. When the citizenship issue was at its peak, we had participated in the panchayat polls, asking people to question us if any foreigner enters Assam. We bagged the highest number of seats in that election. CAA issue had cropped up even during the 2019 Lok Sabha elections, but the BJP succeeded in increasing its tally from seven to nine seats," he pointed out.

The BJP state chief claimed that the CAA is not an issue in the upcoming Assembly elections in the state as people will vote logically, not emotionally. He said that they were convinced that not a single foreigner can illegally settle in Assam as long as the BJP is in power in the state.

Targetting Rahul Gandhi's five guarantees to the people of Assam he said, "Congress can make any promises because they are neither in power nor they will come to power in near future. We are in government and we will again form the government after these elections. We have made promises that can be fulfilled."

Reacting to Gandhi for promising Rs 365 wage to tea plantation workers. He said it is impossible if you will increase wages to Rs 365 all plantations in the state will close and workers will be jobless. Assembly elections for 126 seats in Assam will be held in three phases starting from March 27 and the counting of votes will take place on May 2.