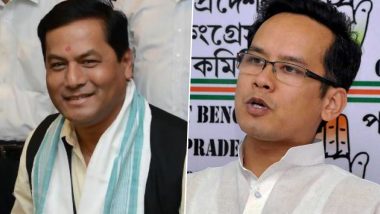 Assam, February 26: Election Commission of India (ECI) held a press conference today to announce the dates of the Assembly elections 2021 in Assam. Assembly elections in Assam will be conducted in  three phases from March 27 to April 6. Assembly Election Results 2021 will be declared on May 2. Tamil Nadu Assembly Elections 2021 Dates: Polling on April 6, Results on May 2; Check Full Schedule.

In the first phase 47 assembly constituencies will go for polls on March 27. In the second phase, voting will be held in 39 seats on April 1 and 40 seats in the third phase. Polling in the third phase will be held on April 6. The voting will be extended by one hour  due to COVID-19. Kerala Assembly Elections 2021 Dates: Polling on April 6, Results on May 2; Check Full Schedule.

The schedule for Assembly elections in elections in Kerala, Tamil Nadu, West Bengal and Puducherry were also announced. The BJP and Congress have been campaigning in these states with senior leaders like Amit Shah, Narendra Modi, JP Nadda and Rahul Gandhi holding political rallies. West Bengal Assembly Elections 2021 Dates: Polling in 8 Phases Between March 27 and April 29, Results on May 2; Check Full Schedule Here.

Here is The Complete Schedule of Assembly Elections in Assam:

Assam has 126 Members of the Legislative Assembly. CEC Sunil Arora had said that Assam assembly elections 2021 will be held keeping in mind the Rongali Bihu festival and CBSE board exams. BJP is the ruling party in Assam. NDA has 74 seats while Opposition has 33 seats. The BJP is also campaigning aggressively to retain power in Assam, where it won for the first time in 2016, beating Congress. The term of the Assam Assembly will end on May 31, 2021.

A team of election commission headed by CEC Sunil Arora has already visited Assam, West Bengal, Kerala and Tamil Nadu to take stock of poll preparedness. A total of 824 assembly constituencies re going for polls during these elections. A total of 18.68 crore electors will cast vote at 2.7 lakh polling stations across the five states.

In view of the rising coronavirus cases, EC mentioned that it has taken all measures keeping in mind the coronavirus protocol.  This is the first major set of elections to be held in the middle of the coronavirus pandemic after the Bihar election.

(The above story first appeared on LatestLY on Feb 26, 2021 05:21 PM IST. For more news and updates on politics, world, sports, entertainment and lifestyle, log on to our website latestly.com).