Kangana Ranaut Reacts to Raj Kundra's Arrest, Says She Will Expose the Corrupt Industry in Her Film Tiku Weds Sheru 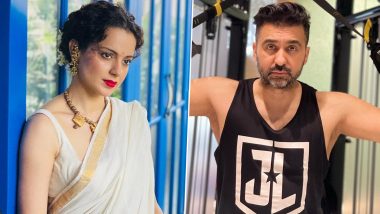 "He appears to be the key conspirator. We have sufficient evidence regarding this," Mumbai Police Commissioner Hemant Nagrale had said in a statement.

Meanwhile, speaking of Kangana, on the work front, she will be next seen in 'Thalaivi', which is based on Tamil Nadu's former chief minister, Jayalalithaa.

Other than that, she also has an interesting line-up of films including, 'Tejas', 'Dhaakad', 'Manikarnika Returns: The Legend Of Didda', and 'Emergency' based on the life of India's former Prime Minister Indira Gandhi in the pipeline. Kangana had recently also announced her OTT debut as a producer with 'Tiku Weds Sheru' and as a host for the Indian adaptation of the American show 'Temptation Island'.