The government has brought forward the target date for achieving 20 per cent ethanol-blending with petrol by two years to 2023 to help reduce India's dependence on costly oil imports, according to official notification. 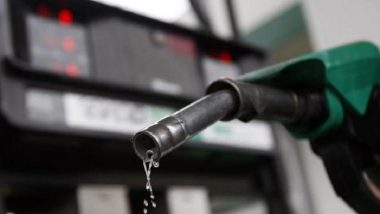 New Delhi, June 2: The government has brought forward the target date for achieving 20 per cent ethanol-blending with petrol by two years to 2023 to help reduce India's dependence on costly oil imports, according to official notification.

Last year, the government had set a target of reaching 10 per cent ethanol-blending in petrol (10 per cent of ethanol mixed with 90 per cent of diesel) by 2022, and 20 per cent doping by 2030. Earlier this year, the target for 20 per cent blending was brought forward to 2025. And now, it has been further advanced to April 2023. Surplus Rice Can be Used For Making Ethanol to Keep Up Supply of Hand Sanitizers, Says Government Amid Coronavirus Outbreak.

"The Central Government hereby directs that the oil companies shall sell ethanol-blended petrol with a percentage of ethanol up to 20 per cent as per the Bureau of Indian Standards specifications, in the whole of the States and union territories," the Oil Ministry said in a Gazette notification. "This Notification shall come into force with effect from the 1st April 2023".

India is the world's third-biggest oil importer, relying on foreign suppliers to meet over 85 per cent of its demand. In the current ethanol supply year, which started in October, India plans to have 10 per cent ethanol-blending with gasoline. As much as 4 billion litres of ethanol will be needed for achieving a 10 per cent mixing ratio.

For 20 per cent by 2023, 10 billion (1,000 crore) litres will be needed. The sugar industry will divert 6 million tonnes of surplus sugar to produce 7 billion litres of the ethanol needed, while the remaining ethanol will be produced from excess grain.