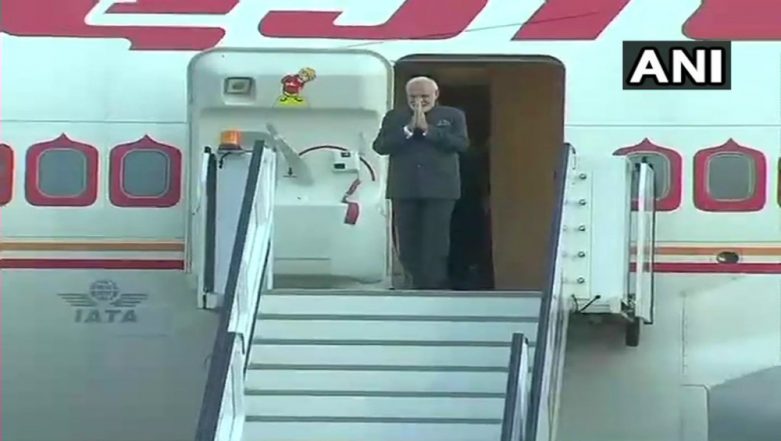 Kigali, Jul 23: Prime Minister Narendra Modi today arrived in Rwanda on the first leg of his three-nation Africa tour as part of India's outreach to the resource-rich continent, becoming the first Indian premier to visit the East African country. The Prime Minister's aircraft landed at the Kigali International Airport where he was received by President of Rwanda Paul Kagame. He was accorded a red carpet welcome at the airport.

His two-day state visit to Rwanda -- one of Africa's fastest growing economies -- assumes significance as this is the first by an Indian premier.

"A special gesture by a close friend and a strategic partner! Prime Minister @narenderamodi personally received by Rwandan President @PaulKagame at #Kigali International Airport on the first leg of his three-nation tour. First-ever visit by an Indian PM to Rwanda," Ministry of External Affairs Spokesperson Raveesh Kumar tweeted.

He will visit the Genocide Memorial and participate in an event on "Girinka" (one cow per family), a national social protection scheme of Rwanda initiated by Kagame.

A defence cooperation agreement is also expected to be signed between India and Rwanda during the visit, T S Tirumurti, secretary (Economic Relations) in the Ministry of External Affairs, said in New Delhi last week.

India will also be opening a mission in Rwanda very soon, Tirumurti said. "During this visit, we expect to conclude two lines of credit -- one of USD 100 million for development of industrial parks and Kigali special economic zone (SEZ), and another one for USD 100 million for agriculture and irrigation," he said.

An important element of the programme would be the prime minister's visit to Rweru Model Village where he will gift 200 cows as a contribution from India to the 'Girinka' scheme of Rwanda, Tirumurti said.

Under 'Girinka', a social protection scheme of the Rwandan government personally overseen by President Kagame, poorest families are gifted dairy cows by the government and the first female calf born to the cow is gifted to the neighbour, thus promoting brotherhood and solidarity.

The cows to be gifted by India would be sourced from Rwanda. "We expect agreements to be concluded in the areas of defence, dairy cooperation, leather, agriculture, and culture," he said.

Modi would proceed to Uganda tomorrow for a two-day visit, the first bilateral visit by an Indian prime minister since 1997.

"Rwanda is an important gateway to Eastern Africa and we have elevated our bilateral relations with Rwanda to the level of a strategic partnership in January 2017," a senior External Affairs Ministry official said in New Delhi.

The President of Rwanda is the current Chair of the African Union. Modi will attend the 10th edition of the BRICS Summit in Johannesburg, South Africa during which the grouping's leaders are expected to deliberate on global hot-spot issues, international peace and security, global governance and trade issues among others.