The bill and the resolution were passed unanimously, even as the opposition Congress expressed unhappiness over the state government obtaining the nod of the House without any 'meaningful discussion'. 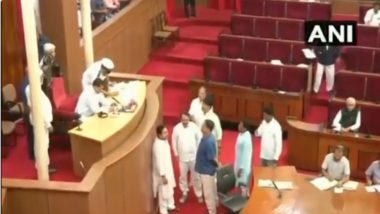 Bhubaneswar, February 17: The Odisha Assembly on Monday passed the State Commission for Backward Classes (Amendment) Bill, 2020 and a separate resolution, paving the way for conducting surveys of the social and economic condition of people belonging to backward classes.

The bill and the resolution were passed unanimously, even as the opposition Congress expressed unhappiness over the state government obtaining the nod of the House without any "meaningful discussion". While Chief Minister Naveen Patnaik moved the resolution, the ST, SC Development, Minorities and Backward Class Minister Jagannath Saraka piloted the bill.

"In a historic move today, this August House has resolved to amend the Odisha State Commission for Backward Classes Act, 1993..." Patnaik said.

He also described the resolution as "historic". "The state will do survey of social and educational condition of people belonging to the backward classes," Patnaik said. He said to further accelerate inclusive growth, it is important to have reliable data about the backward classes of Odisha.

"Unfortunately, we do not have access to any recent data on this. The last census was done in 1931 which is now almost 90 years old. With a century-old data in hand, we cannot make an accurate and focused planning to reach out to the backward classes of the society," the CM said.

Patnaik said media reports claimed that former Home Minister Rajnath Singh had made a mention of the backward classes survey being included in the Census 2021. The BJD has raised the issue in Parliament, he added.

"However, there has been no response from the Centre. On February 12, we constituted the Odisha State Commission for Backward Classes with retired justice Raghunath Biswal as its chairman," Patnaik said.

Congress whip Taraprasad Bahinipati said: "We are not opposed to the bill and have supported it. But, it should have been debated properly... while making provisions for the Other Backward Classes, the concerns of poor people belonging to other castes should also have been considered."