Injured Indian batsman Shikhar Dhawan has hit the gym as he races against time to recover from a hairline fracture that has put him out of three World Cup matches. 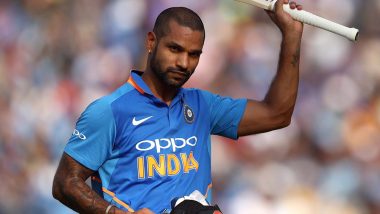 Nottingham, June 14: Injured Indian batsman Shikhar Dhawan has hit the gym as he races against time to recover from a hairline fracture that has put him out of three World Cup matches. With a heavily bandaged left hand, Dhawan was seen doing lower body exercises in a short video posted by him on his Twitter page. Shikhar Dhawan Posts Cryptic Tweet With 'Nothing Can Stop Me' Message Amid Reports of Being Ruled Out of ICC Cricket World Cup 2019 Due To Injury.

"You can make these situations your nightmare or use it an opportunity to bounce back. Thank you for all the recovery messages from everyone," was the accompanying message from the star batsman. Not Rishabh Pant, Ajinkya Rahane Should Replace Injured Shikhar Dhawan in Team India Squad for CWC 2019, Feel Twitterati!

The 31-year-old picked up the injury during his match-winning hundred against Australia on Sunday.

What was initially seen to be a swelling in his left thumb turned out to be a hairline fracture after closer examination.

He was then ruled out of India's rained out game against New Zealand here on Thursday, the marquee clash against Pakistan on Sunday in Manchester and the match against Afghanistan on June 22.

Young wicketkeeper-batsman Rishabh pant has been brought in as cover for him but he will only get access to the team's training sessions for now.

Pant will be allowed into the dressing room only if the team management decides to declare Dhawan unfit for the remainder of the tournament.

An assessment of his injury will be done next week.