German started the game on a high note as he clinched the first set in a tie-breaker despite facing a tough challenge from the world number one. 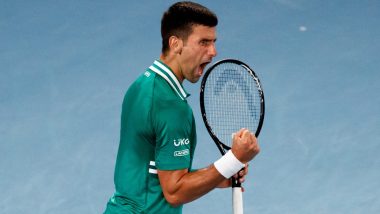 Melbourne, February 16: World no. 1 Novak Djokovic on Tuesday defeated Germany's Alexander Zverev in the Australian Open at the Rod Laver Arena to register a place in the semi-finals. It was an intense clash between the two top-ranked players as the sixth-ranked Zverev fought till the end against the Serbian in a bid to progress to the next round of the tournament.

Djokovic came from behind and after losing the first set he won the clash 6-7(6), 6-2, 6-4, 7-6(8) that lasted for three hours and 30 minutes. German started the game on a high note as he clinched the first set in a tie-breaker despite facing a tough challenge from the world number one.

After going down in the match, Djokovic came out with all guns blazing and claimed the next two sets easily. He won five games in a row to steal the third set from Zverev, taking it 6-4. Australian Open 2021: Serena Williams Knocks Simona Halep Out, Progresses to Semis.

In the fourth set, Zverev took the early lead but he could not hold it long as Djokovic saved nine of 12 break points, including a set point at 5-6 in the fourth set with an ace, to earn his sixth ATP head to head victory in eight matches against Zverev.

The 33-year-old has now won 11 straight matches against top 10 players at Melbourne Park, dating back to his quarter-final loss to eventual champion Stan Wawrinka in 2014. Aslan Karatsev Becomes First Man To Reach Australian Open 2021 Semi-Final on Debut in Open Era.

Djokovic will now play against Grand Slam debutant Aslan Karatsev for a place in the championship match. The 27-year-old defeated Grigor Dimitrov 2-6, 6-4, 6-1, 6-2 to become the first player in the Open Era (since 1968) to reach the semi-finals in his maiden major championship appearance.