Get latest articles and stories on Sports at LatestLY. Barbados Royals have appointed Trevor Penney as their Head Coach for the 2022 season of the Caribbean Premier League (CPL) on Thursday. He will work closely with the Royals' Director of Cricket, Kumar Sangakkara as part of the role. Currently, he is working as the Assistant Coach for the 2022 edition of the Indian Premier League with partner franchise Rajasthan Royals. 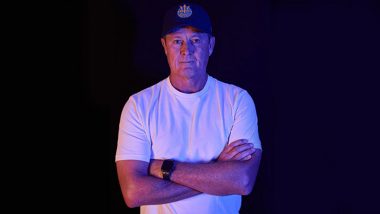 Bridgetown [Barbados], April 8 : Barbados Royals have appointed Trevor Penney as their Head Coach for the 2022 season of the Caribbean Premier League (CPL) on Thursday. He will work closely with the Royals' Director of Cricket, Kumar Sangakkara as part of the role. Currently, he is working as the Assistant Coach for the 2022 edition of the Indian Premier League with partner franchise Rajasthan Royals. Penney has been a stalwart of Warwickshire County Cricket Club, having a career for seventeen years as a player with the county club before setting off on his extensive coaching career around the world.  Nari Contractor Gets Plate Removed from his Head After 60 Years, Former India Captain Now Recovering.

Penney has vast experience working on the international scene with teams India, Sri Lanka, England and more recently with the West Indies white-ball team. He's also been involved through his coaching with associate nations such as the Netherlands and the USA. The Zimbabwean has previously been a regular feature on the T20 franchise circuit with past experiences in leagues such as the IPL the CPL, Bangladesh Premier League, and the GT20 Canadian League. Speaking on his appointment with the CPL franchise, Penney said, "It's wonderful to continue in being a part of the Royals family, across a new league. I've previously been a part of the CPL and I'm excited to be back in the league as part of the Barbados Royals this time. Working alongside Kumar, I feel we've got a great opportunity to create an environment that helps everyone express themselves and play the brand of cricket we want to play here at the Royals. I'm really looking forward to working with some top talent in the West Indian game and hopefully helping them get better."  Rashid Khan, Afghanistan Cricketer, Starts His Personal Merchandise 'RK 19' With Focus on Charity.

Welcoming Trevor Penney to Barbados, a statement from the team read, "It's fantastic to have Trevor as the Head Coach here at Barbados Royals. We're really happy to have him add another key role as part of the Royals family. It's beneficial to have one coach working across the two Royals teams, and we feel it will help us translate our learnings and our way of cricket across both the teams and have that uniformity. Trevor Penney is one with the values and ideology that we have here at the Royals and is also one of the most revered coaches in international cricket, has a lot of experience and understands the game very well which will help contribute to the squad's overall growth and performance."

Barbados Royals have announced further additions to their coaching setup. West Indies bowling coach Roddy Estwick joins the Royals as Lead Assistant Coach for the upcoming season. The Barbados native was an assistant coach at St Lucia Kings in previous seasons. In addition, former Jamaica fast bowler Andrew "Trash" Richardson continues with the Royals as Assistant Coach, a role he also held in 2021.