Get latest articles and stories on Sports at LatestLY. Bengaluru Torpedoes blocker Srajan U Shetty said that playing for his team in the Prime Volleyball League, is the biggest opportunity of his career. 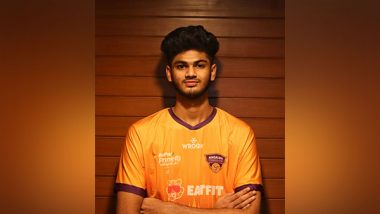 Bengaluru (Karnataka) [India], January 29 (ANI): Bengaluru Torpedoes blocker Srajan U Shetty said that playing for his team in the Prime Volleyball League, is the biggest opportunity of his career.

"This will be my first time playing at such a level, so all I want to do is just learn. I want to gain experience and learn new techniques from all the experienced Indian and the foreign players that will be playing in the tournament," Srajan said in a statement.

"It is a big opportunity for me playing for Bengaluru Torpedoes and I look to make the most of it this time in the Prime Volleyball League," he added.

Hailing from Karkala town in Udupi district of Karnataka, Srajan had always been a big follower of the sport since childhood.

"I was a big fan of cricket. But over a period of time, my interest dwindled as I started watching volleyball. You can only focus on one sport at a time," Srajan said.

Srajan's University team's coach suggested him to apply for the Prime Volleyball League 2022 edition when the selections started last year. He filled up the form and submitted it, but admitted that he was not expecting to be selected.

"It was a complete surprise for me when my name came in the U-21 category for the Prime Volleyball League. And when Bengaluru Torpedoes bought me at the auction, it was the happiest moment of my career," Srajan said.

"I could not believe it that this was happening to me. I was quite elated, and my parents were really happy, as well," he added. (ANI)