Sports News | Have Lot of New Faces, Everyone Wants to Leave Impression in England T20Is: Simmons

Get latest articles and stories on Sports at LatestLY. West Indies head coach Phil Simmons has said that there are a lot of new faces in his side, and it will hold the side from the Caribbean in good stead in the upcoming T20I series against England. 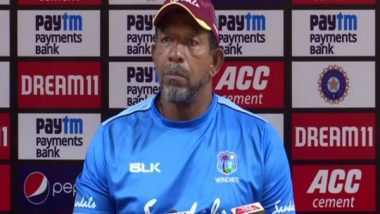 Bridgetown [Barbados], January 21 (ANI): West Indies head coach Phil Simmons has said that there are a lot of new faces in his side, and it will hold the side from the Caribbean in good stead in the upcoming T20I series against England.

West India and England will lock horns in five T20Is, beginning Saturday, and then both teams will also square off in three Tests.

All the matches of the T20I series will be played at Kensington Oval, Bridgetown. Eoin Morgan will lead the English team that will see T20 specialists like Jason Roy, Moeen Ali, Liam Dawson, Liam Livingstone among others.

"In Pakistan, yes we lost the three games but there was a lot more energy, a lot more enthusiasm and that's the group that's coming into this series here against England. We have a lot of new faces and a lot of guys who want to make an impression and be part of the team going forward, so I think from that point of view it is not as difficult as it would seem," said Simmons in an official release.

Roy had made a sensational century (115 off 47 balls) in a warm-up match against the Barbados Cricket Association's (BCA) President's XI match on Wednesday.

For West Indies, Kieron Pollard & Co. will look to get back to winning ways after being handed a surprise loss in the recently-concluded ODI series by Ireland. On Tuesday, West Indies' top-order made good use of their warm-up against BCA President's XI. Chasing a revised target of 160, they sailed home in 18.3 overs to win by seven wickets. Kyle Mayers (38), Brandon King (32), Nicholas Pooran (27), Darren Bravo (32*), and Roston Chase (27*) all made most of the match with good starts contributing to the win.

England tour of West Indies will be available LIVE on FanCode App or www.fancode.com from January 23, 2022.